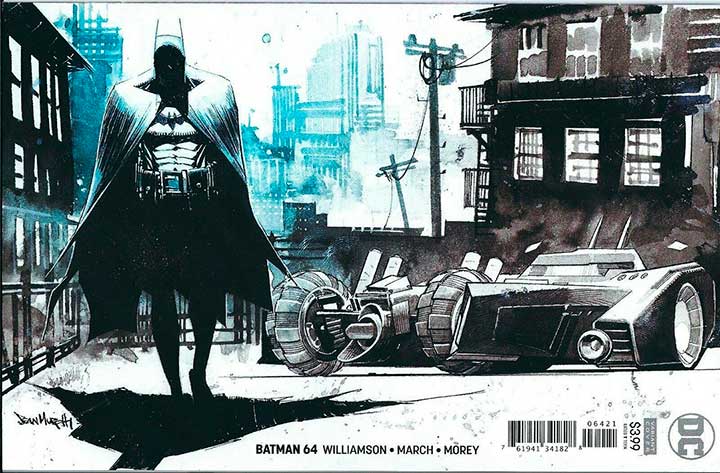 To start, if you’re reading Heroes In Crisis, Batman & Flash 64 & 65 are gonna be a must! OK, warning, minor spoilers… minor, but SPOILERS nonetheless.

The story starts with a battle between the Justice League and their Amazo counterparts. They’re strained. Between the battles and what’s happened at the Sanctuary they’re physically and mentally beat. Especially Bats. It’s weighing heavy on him. At the same time, Flash just lost one of his closet friends with Wally. He tries to smile and be optimistic on the outside for the people he protects but his pessimism and anger is beginning to show, especially towards Bats.

After the fight with the Amazo team Bat’s heads out first. He’s been tracking small disturbances that have been escalating and Central City is the next place. Bats and Flash save the day but the tension… Flash is tired of Batman’s secrets. Too many have died and Wally is tearing him apart. He calls Batman on his BS about not knowing who’s doing this and Batman tells him… Who is it? I’ll give you a hint. Batman Rebirth. I’ll leave it for you to read.

Joshua Williamson steps in for Tom King and writes a great start to “The Price of Justice” arch. He really nails the characters emotions, especially of Batman and Flash’s anger and Guillem March catches all the details in the art. One scene where Bats is snapping Amazo Flash’s head off with his utility belt you feel the anger coming off the page. They set the tone of this tragic story perfectly and the ending… again, I don’t wanna spoil it but Harley is far from the only crazy chick. In all the craziness one thing is clear after the shocker. Batman and Flash are going to have to work together. Right now the worlds greatness minds are needed.

If you’re not reading Heroes in Crisis you may not understand the score but if you are, I think you’ll agree. Tie in’s can be notorious for money grabs but not here!

#artistspotlight this week is the great artist @pa

Hey there kids, it's your old pal Uncle Mac back o

And here is your winner of this week's #RANDOMPULL