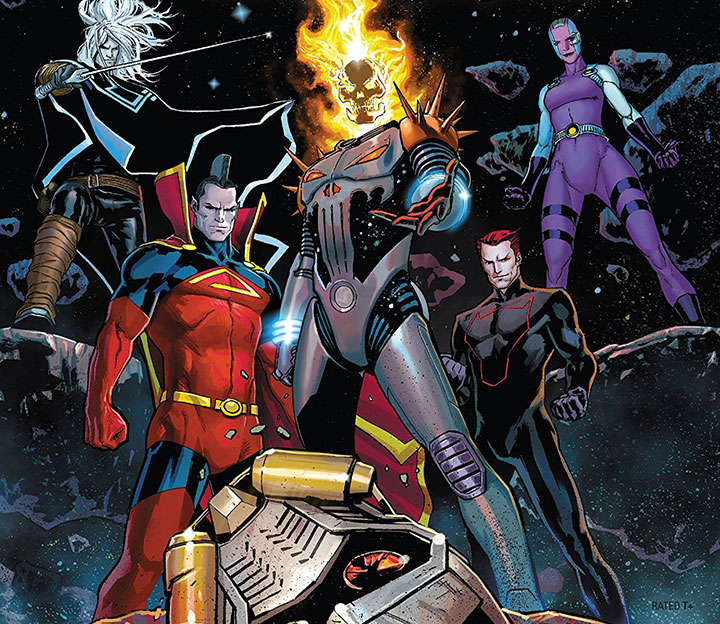 I want to warn you now. This review has HEAVY SPOLIERS! If you plan on reading this, my advice is to wait until after. If you’re just curious as to what’s going on, proceed. But remember, you’ve been warned!

Even in Death Thanos has caused a cosmic crisis. Issue 1 showed Eros, the Madd Titan’s brother, gather a group of some of the biggest and baddest cosmic players to watch Thanos’ eulogy. Thanos claims that in his death his conscious would be uploaded into an unknowing character. Immediately, Gamora came to the front of everyone’s mind and left the group spilt between whether to kill her or give her the benefit of doubt. Even though there’s no real proof it’s her after killing her father, Gamora almost destroyed the universe with the Infinity Gauntlet. So there’s not alot of love for her anyways.

In this issue we begin to see 3 factions form. Those who want to kill Gamora, those who want to protect her, and The Black Order, who under the command of Hela, are out to find Thanos’ decapitated head.

One of the things I’m loving the most about this series so far is the use of all these great characters that Marvel doesn’t use much anymore. One of the first we see in issue 3 is one of my favorite villians, Annhilus. The Black Order has traveled to the Negative Zone to find the “first born son of oblivion”. Hela knows Annhilus has Thanos’ head.. In fact he’s given it to his children to play with. Annihilus is a bad ass but we see quickly Hela is going to be hard for anyone to stop. Without the Black Orders help she quickly makes short work of the leader of the Annihilation Wave but doesn’t kill him. The Goddess of Death instead makes him an offer he can’t refuse in return for the head.

Next we see who will be called the Dark Guardians which is made up of Eros, Gladiator, Nebula and Cosmic Ghost Rider. They have found the one man who knows the location of Gamora, Richard Rider aka Nova. They’ve cut off his connection to the Nova Corps but Nova’s no push over and is not going to give up her location.

As he begins to take on the Dark Guardians he’s attacked from behind by Wraith. As he wraps Nova up he reveals a very interesting plot twist. He’s searching for Knull who he calls “The Exolon God” so he can free himself of his Black Curse. Starfox has promised him information for the head of Gamora. He’s not pulling punches either. Before he can kill Nova the Dark Guardians intervene. Castle tries to calmly talk Nova into giving up Gamora’s location, telling him “It’s time to pick a side”. With one last burst of energy, Nova blasts everyone back and takes off. As they begin to chase after him, Nebula stops the team and convinces them that tracking him would be smarter. She has a point. Nova’s beaten, outmatched, confused and cut off from the Nova Corps. Who’s he going to run too?

Next we see The Ryder, Star Lords infamous ship, floating in space. He’s been depressed and drunk since the Gamora tried to kill him and floating around the galaxy with Groot. He’s very conflicted as to what to do but Groot’s not. Gamora is family and he believes she’s worth saving and has rallied together, Beta Ray Bill, Moon Dragon and Phyla-Vell. If Star Lord won’t lead them, he will. Whether Peter likes it or not they’re going to Halfworld where we see at the end Gamora is looking for Rocket.

Another win for Cates

Donny Cates is penning what is looking to be another instant classic and teaming back up with Geoff Shaw has shot Guardians of the Galaxy to the top of my read pile. Sure I broke down the story but Cates delivery is flawless. I love the way he broke down the 3 factions that came together in this issue. The chemistry between the charecters is great. Especially Groot and Star Lord’s. Watching Groot take command was pretty awesome. Then the side twist… Wraith looking for Knull? Outside of the Venom series this is the first I’ve seen anyone say the Symbiote God’s name. I’m very intrigued to see where that goes as Wraith has been shown early to be a major threat.

The parallels between the 3 leaders, Hela, Quill and Starfox, is very interesting as their journeys truly begin. Starfox(Eros) maybe the most. There seems to be alot he’s hiding and can potentially be playing his own long game. With a writer like Cates though you know there’s going to be a lot of twist and turns as the story unfolds. I haven’t been this intrigued by a Guardians of the Galaxy book in awhile. Whether an old fan or new you can pick this up. Cates has a way of not over complicating things while bringing in older characters and staying true to their roots while putting his own spin on things to keep it fresh. His story telling is simply superb and on a cosmic scale he’s got a lot to work with. I highly recommend Guardians of the Galaxy and since it’s only 3 issues in, it shouldn’t be hard to find the first 2.

Without a doubt issue 3 of Guardians of the Galaxy stays at a 5 outta 5 💀 rating and gets the Comic Book Fiend Club, Stamp of Approval.