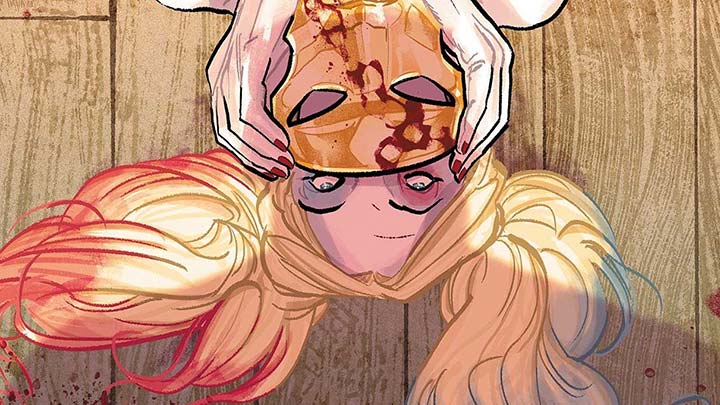 After reading “The Price” arch and by the cover that states, “Who’s Behind the Massacre?” I really thought we’d get more answers in issue 6 of Heroes in Crisis. After reading I was a bit upset but that’s the problem with having expectations of certain things. Especially answers to a huge murder mystery. After taking all my expectations of answers away I was left with more questions but I was also left with a brilliant book. I can possibly see why they changed it from 7 to 9 issues. They probably could have finished the story with 7 issues plus the 4 tie-ins. It seems Tom King wanted to flush this story out more and really hit harder on what it is to be human… or superhuman. In particular one that strives to do good and whether or not it’s worth it.

Issue 6 focuses on the stories of Gnarrk, Wally and Harley’s stay at the Sanctuary. They all run parallel together and center around living much different lives than they’re used to. More specifically dealing with the changes and their past while trying to focus on their futures. Harley’s mental state and relationship with the Joker is touched on in a morbidly funny way with Ivy trying to help. Wally has been in a different timeline since Rebirth and has been struggling to make sense of it all, especially the loss of his family. Lastly is the backbone of the book, Gnarrk’s story.

The caveman out of time is a living contrast between the then and now. The evolution of man. He speaks very simple while contemplating the works of intellects like Hobbs and Rousseau who wrote about similar subjects from very different points of views. He goes on to Keats, quoting his poem “Bright Star”. It’s a romantic poem about the need for human relationships, connections, and specifically, intimacy. All these strike the heart of the book and it’s just brilliant how it’s pulled off. His final thoughts on Plato’s allegory of the Cave is the “wow” moment that King, Gerads and Cowles use to play into the most hard hitting issues at the core of the story. That being the distorted reality of the characters. I had to read it twice because you’ll miss out if you’re just looking for the killer and it’s masterfully written and drawn.

Looking in the rear view mirror

With out giving spoilers away issue 6 is a mirror of 3 with its head spun. Everything you think you know you don’t. At least on how the deaths, Wally’s in particular, went down. So while I wanted answers so bad, some I got to a point, the new questions began to fill up quick. By the end your left questioning everything you thought you knew so far as we see things from different points of views. These last 3 issues are really going to make or break this series. I have faith though. So far, at least for HiC in particular, King’s given me no reason to doubt him, and after Flash 65 I really think the curtain will truly begin to be pulled back in issue 7 as the Trinity gets to the bottom of what I believe will be a DC Universe shattering revelation.

Sit back and enjoy the show

Do NOT come into issue 6 expecting all the answers. Just enjoy storytelling at its finest about these real issues most of us have dealt with or contemplated at some point. This is easily a 5 skull book for what so far has been a 5 skull series. Tom King is quite possibly crafting a series that will be talked about for years to come. Teaming back up with Mitch Gerads and Clayton Cowles is perfection. They just work so well together. Don’t count Clay Mann out though as his 2 pages are enough to show why he’s still very much needed and Tomeu Morey‘s colors are consistently great. This was an All Star book and all talents are on full display.

Is the price worth it?

If you’re wondering whether to read “The Price” arch I’d highly suggest it. It’s not a money grab tie-in and I very much enjoyed diving deeper into Bats and Barry’s minds and relationship. As far as what to read first, Flash #65 or HiC #6, in my opinion it works either way. I personally finished up The Price arch first but had I not read the Flash first I don’t think I would have had the expectations I did for Heroes in Crisis as the 2 run together. Not back to back. It may have very well changed my point of view for the better. Either way they’re both great.

Hello friends and fiends! We are so excited to a

The Midwest would like to wish everyone a Happy Th

#FeedingamericaCBFC $362 was donated to Feeding A