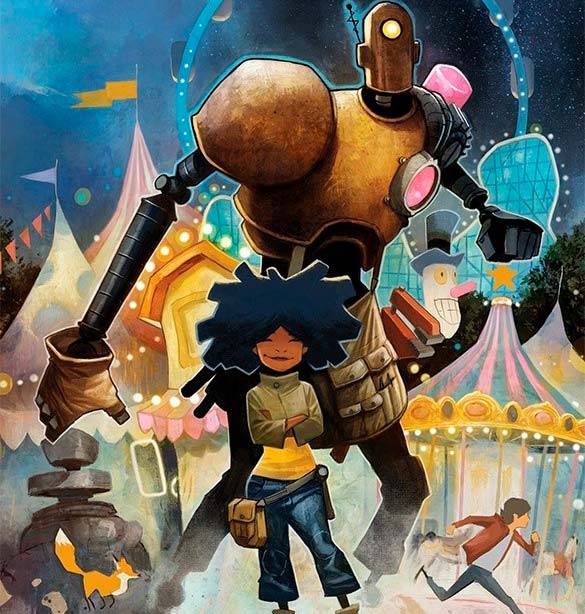 If you haven’t been following Skottie Young and Jorge Corona’s new series Middlewest you’ve been missing out on quite the adventure. My fellow fiend @friendlyneighborhoodjonathan put me on to this book early and I’m extremely happy I decided to give it a shot.

Issue 4 starts off with Abel and Fox at a traveling carnival looking for Magdalena, a healer of sorts, but have no luck finding her. This is really the first time in the story that Abel realizes running away has other problems than those of the magical and mythical type. He’s gotta eat and as hunger sets in he realizes he doesn’t have any money.

Fox suggests stealing and while Abel’s reluctant as he reflects on what happened the last time he stole, he goes along with Fox and actually has some success. Unbeknown to Abel he’s already caught the eye of some of the carnival’s workers who spotted him out early on as he was moping around. Of course when he goes back for more they catch him in the act and the chase is on. When finally surrounded we’re left with a cliffhanger that shows Abel’s emotions bringing out the storm inside.

While we get no real answers in this issue it sets up issue 5 nicely and introduces a set of compelling new characters with Bobby and Wrench. The duo is a great counterpart to Abel and Fox. Bobby works on the carnival equipment and rides and Wrench is her loyal robot she built. It’s going to be very interesting to see how they fit into this coming of age tale.

Great storytelling plus amazing art equals a must read

Skottie, who’s probably known best for his art, is an amazing storyteller. Making something as plain as the Mid West and turning it into this magical, bigger than life place with adventures around every corner is great and it flows so smoothly. The pacing is perfect and really sucks you in as you watch this kid’s adventure and before you know it, you’re hooked.

Of course every good story needs good visuals to make it great and Jorge Corona does not disappoint. The motion and emotion of Abel is brought to the page in quite an engaging way. He nails all the small details in this bigger than life story. It’s feels very rich and adds to the overall world building of the story. Set at night it really gives the colorist, Jean-Francois Beaulieu, time to shine. The colors pop beautifully through the lights of the carnival. It’s bright, vivid, colourful and awesome to look at as you flip through the pages.

This is a true pleasure to read and each issue has been amazing. Middlewest gets 5 outta 5 skulls as we’re diving deeper into this independent masterpiece.

I highly recommend reading if you haven’t. It’s still early, so finding the first 4 issues shouldn’t be hard to track down.

Hello friends and fiends! We are so excited to a

The Midwest would like to wish everyone a Happy Th