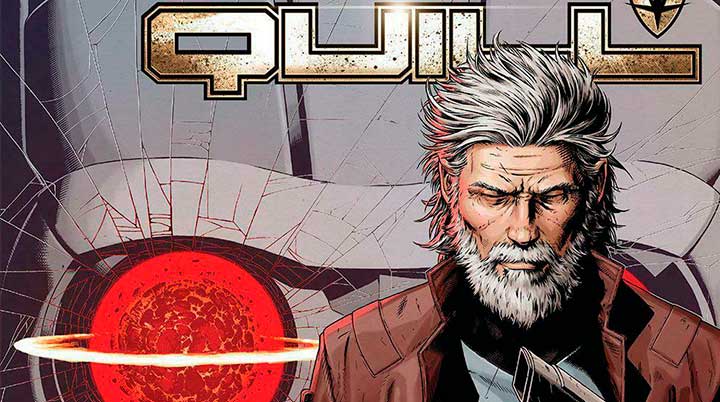 We’ve seen life after the villain uprising through the eyes of Logan & Hawkeye. Now, Ethan Sacks is writing on a Galaxy level through the eyes of Star Lord, well, Peter Quill. When we first see the character he hasn’t gone by that name in a long time. He lives on Spartax where he has taken over for his father as Emperor and he’s happily married to a woman named L’ssa. They have two kids, a boy and a girl, Jason and Meridith.

From the beginning there’s a battle coming. These zealots called The Universal Church of Truth have warned them to evacuate their planet or die. His council has advised to evacuate as well as his wife who asked him to at least reach out to the Avengers for help but he got no answer. Not taking that as a possible bad sign he shrugs it off and jokes,

“let’s see if I help with their next Civil War”.

Quill has a plan and is confident striking first with a sneak attack will eliminate the threat. Well, this is one of those times where things went way too easy. The plan went perfect. However, it’s not Quill’s plan I’m referring to. Quill left Spartex unguarded for a slaughter. There are no survivors. He looks at his planet and begins to drink away his pain.

Depressed and out of alcohol he puts himself in a cryogenic sleep until a moonshine shipment arrives. He’s awakened 2 months and 3 days later to not moonshine. But to a mission, as Gamora, Drax, Mantis and Rocket arrive to pull him out of his funk. More importantly, Quill needs redemption. There are a lot of questions to be answered, as their reunion wasn’t as pleasant as you might think but the Church has been on the tail of the former Guardians too.

After responding to an emergency beacon they are trapped by a swarm of brood. It’s apparent the emergency signal had been left on by the Brood to kill anyone that responded to the help. But what they can’t figure out is why this Brood trap was allowed to go on so long in the same system as Earth.

Where are the Avengers? The X-men? There’s obviously only one way to find out so they head for Earth. As they get close to the planet’s orbit a satellite shoots them down and they make a nasty crash landing. At least they’re on Earth, right? Well now it’s the Wasteland and as their first survivor they encounter tells them, “It’s Hell”.

This series is set to be a 12 issue run like Old Man Hawkeye and with Ethan Sacks writing again the potential is high.

While it’s a darker book with death around every corner it does a good job of bringing that Guardian humor and balances the gore and laughs well. Rocket joking about his back pain after killing some Brood is a good example.

The book leaves a lot of questions though. Why did they spilt? Who’s the Universal Church of Truth? Where in the timeline does this fall? What happened to Groot? There’s alot going on and while it doesn’t feel extremely rushed Sacks has alot to explain going forward.

Robert Gills art fits the book well. I’ll will say, while he didn’t have to make Star Lord look like a Kurt Russel/Ego look alike, he did deliver on the older character designs. The splash pages, whether looking upon a destroyed Spartex from above or Mount Doom, are detailed well. Overall I think there could have been a better foundation laid. However, I enjoyed the book and love the characters enough to want to see where this goes. I’m definitely intrigued by some of the unknowns.

If you’re a Guardians fan and/or enjoyed the books that have taken place after the Villains Uprising I’d recommend picking up Old Man Quill.