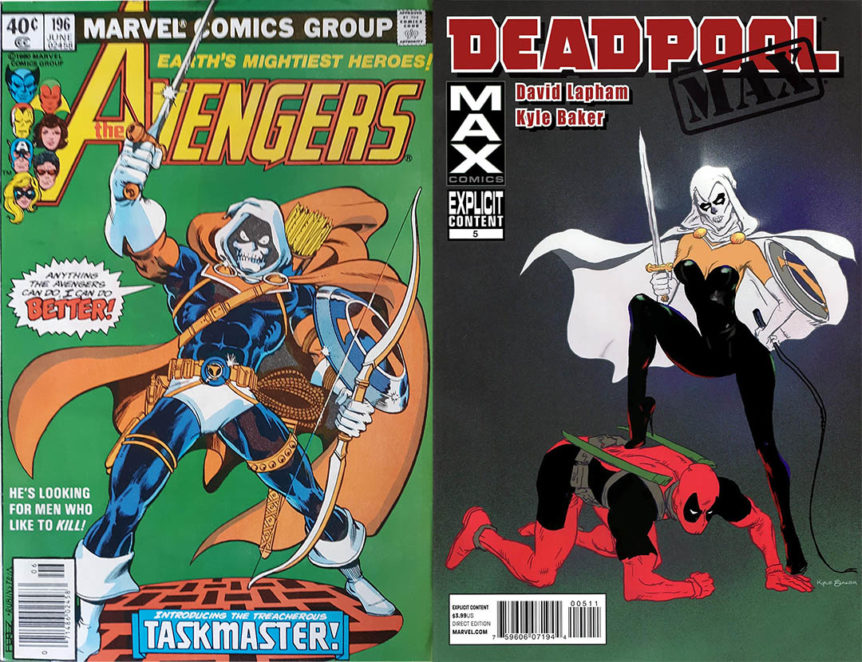 Ok so we’re gonna do the first edition of “Behind The Scenes With Fiends”. If you ever wonder about some of the stuff we post I wanted to give you the method to the madness. So, in chats we talk all day about what could happen in movies or books. Not that it will, we’re just nerds and it’s fun to talk about. In the Social Media chat I dropped this shot of Taskmaster and @doom_wzrd said “I think it’s a chick” which led to an interesting discussion.

@thecomicraider‘s expletives out of it came down to a few things. 1. There’s no top billing for a male star. 2. A few big actresses are cast with unknown roles. 3. Pics of different CGI behind the scenes are all female. The list goes on. Now this in no way means it’ll happen. We all agree people would lose their minds. IMO, for it to be done right, you keep it a complete secret. Just let us enjoy the movie, watch Taskmaster kick ass and at the end there’s a reveal. If Disney confirmed now, people would act stupid and refuse to see the movie on the whole “Social Justice Warriors” kick. Also, there’s a perfectly normal reason there’s no lead male role… He never takes his mask off and is just the mercenary his fans love. As well, Rachael Weisz has been cast as Iron Maiden who looks A LOT like this version of Taskmaster.

It’s all pure speculation (I really hate that word) but I thought it’d be cool to give you a PG look into the minds of Fiends like Doom @inked_j3di_, @thecomicarchive, @bike.zombie, and myself, @palmettopunisher Hope this doesn’t ruin your night… Unless your a comicsgate member.. If so.. Who cares?