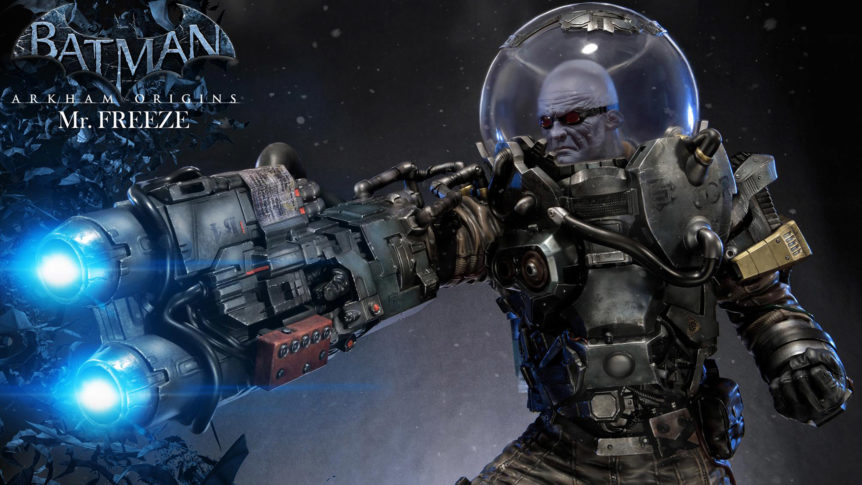 Today we are looking at the Prime 1 Studio Arkham Origins Mr.Freeze 1:3 scale statue. This statue was sold and disturbed by Sideshow Collectibles.  This is the exclusive version of the statue, number 212/350.

The statue was shipped in two boxes with one box being a two-tiered box.   The statue was packaged with a black cloth wrapped around each piece individually, which is a real nice touch aside from the wax paper or plastic that most statues come wrapped in. The base itself came wrapped in wax paper with a plastic wrapper.  I believe the plastic wrapper was used to help you pull the base out of the box due to its enormous size. The statue came with an instruction handout, a flyer for additional statues in the Arkham line and a Prime 1 Studio 2019 calendar as well as a 2018 Prime 1 Studios catalogue. The statue came in numerous parts including the base, guard rails, multiple icicles, the body, portrait, dome, and multiple pieces of tubing and extensions. The engineering that went into this piece alone is outstanding.

Once you put the statue together his measurements come to 34 inches tall, 33 inches long and 25 inches wide. I didn’t weigh the statue itself because it’s impossible to move this piece anywhere in one piece, but my guess is probably close to 100lbs when it’s all put together. It’s almost like the entire body is one giant piece of metal alone.

Starting with the base, one word. incredible! The paint on the base is a metallic sliver with beautifully done white snow paint all over the base. The snow has a glitter effect that looks like its real glistening snow. The base also has a glitter effect making it look like it froze over just by Mr.Freeze’s presences alone. Coming off of the base is multiple icicles that come in separate parts. They are done in translucent resin that feels almost like plastic but it goes to show the amount of details that Prime 1 put into this piece. The icicles have the same snow paint effect done as well. The back of the base has a Bat logo that is consistent with the rest of the line to keep the continuity with the other statues in the Arkham line. There is also an exposed section in the back of the statue showing some wires running along the bottom of the base to give it more detail and add to the story of the piece.

Moving up to the boots that connect the statue to the base with one giant keyhole and peg that goes in smoothly. The weight of the body alone will push the peg into place with no problems. The boots have a lighter snow effect on them but it’s a nice touch and very well done. Multiple markings running along the boots to show that he has worn them for a while and they have acquired damage along the way. Multiple pieces of piping are connected to his legs to show how intricate his freeze suit is with these pieces of piping running all the way up to his knee.  The pants are exposed at this point and are a darker brown color with multiple folds and creases in the pants to show the bend in his knee as he is taking a step. The pants have a zipper running down each leg that has a great paint application to make you think it’s an actual metallic zipper built into the suit.

Once you get to the upper body the freeze suit’s chest pieces shows multiple Gotham Corps logos and tubing running across it. The chest piece shows damage and wear and tear all through out the front. The tubing is connected to his arms and multiple regulations packs running along his belt area.  The right arm is exposed and holds the exclusive for this piece which is his right hand holding a Nora snow globe. The regular version of this statue is his right fist clinched. The exclusive hand is not held in place very well as the magnet seems to be pretty weak as compared to the regular right fist. The Nora snow globe is real glass and is very fragile. The Nora figure seems to be very breakable as I was concerned just sitting her in the hand by the peg.

Leading off of the back of the right hand is multiple pieces of pipe that feed into two huge canisters that sit in his back. The canisters feed into his suit and his freeze gun.  The detail on the canisters alone is amazing with frost effect running along the bottom of each canister and multiple warning and worn out logos and decals.  I’d say the canisters alone weight maybe 10lbs or more.  The handles on top each have tubing that feeds into his dome and have the same frost and snow effect painted on to them.

The left hand is all basically his freeze gun with the left hand built into the freeze gun itself.  The gun is the size of a real 9mm handgun.  It’s insane the size of this piece.  I had trouble getting this piece to connect to his left arm, but it’s held by maybe the strongest magnet that I’ve ever felt in a statue.  The detail on the gun is hard to describe. The paint once again shows the wear and tear and damage as well as multiple decals and logos painted on.  It’s primarily a dull steel color painted piece with a hint of blue painted in as well.  There are multiple pieces of piping that you have to connect to the top of the gun to his left arm as well.

The portrait for the statue is very reminiscent of the Batman Animated Series version of Mr. Freeze. It shows a very pronounced cauliflower ear and red lenses goggles that wrap all the way around the portrait.  The paint application of the portrait is a lighter blue that looks like it’s been froze really brining it to life straight from the game. The dome that sets on top of the suit is massive; it’s almost like a fish bowl. It has a condensation effect painted into the inside of the dome to show the moisture that gathers from his suit.The dome sits on top of the body with two key holes that go in with ease.

The statue is really a grail piece and that’s something that I’ve never said before about any piece I have owned.  It’s crazy to put into words just the sheer size of this piece and the detail in it. Pictures and videos can only do this piece so much justice but its really something you have to see in person.  If you are preparing to buy it or anticipate it coming in soon be prepared to allocate a lot of your display space for this piece as it takes a huge footprint in any collection.

The icicles and the freeze gun stick out 12 inches from the base so it can be bumped into easily and parts could be broken so be careful where you ultimately plan to place this piece.  The one real negative I find about this piece is the fact that exclusive right hand is not held in very strongly and has plenty of play but I figure so sculptor putty can cure that.  There is also one icicle that connects to the base that I don’t think sits 100% flush, but it’s nothing major.

The exclusive cost $1449.99 and is currently waitlisted. Also be aware that shipping on this piece is going to hurt, costing me $220 to ship from the west coast to the east coast of the states. I’d recommend this piece to any Batman collector or someone looking for a definitive Mr. Freeze piece as I find it hard to believe this one will every be topped.  Enjoy and please let us know if you plan to pick up this piece and tag us in any pictures and remember…..ALL HAIL THE CRIMSON BAT!