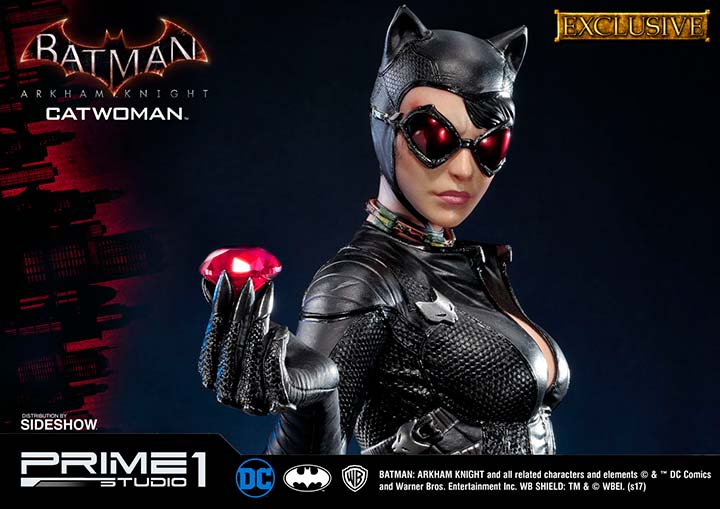 Today we are looking at the Prime 1 Studio Arkham Knight Catwoman 1:3 scale statue. This statue was sold and disturbed by Sideshow Collectibles.  This is the exclusive version of the statue, number 147/500.

The statue was shipped in one box with two tiers. The box was smaller for a Prime 1 Studio piece but was very heavy due to the base. The statue was packaged with a black cloth wrapped around each piece individually, which is a real nice touch aside from the wax paper or plastic that most statues come wrapped in. The black cloth prevents any kind of paint rub that I’ve seen on some pieces that come wrapped in the wax paper. The statue came with an instruction handout, a flier for additional statues in the Arkham line and a Prime 1 Studio 2019 calendar which all was a nice additional touch that I didn’t expect. The statue came in multiple parts including the base, body, three different portraits (including the exclusive for the statue) and two additional portrait stands to help display the additional portraits. It also included four different arms for different poses, three different colored acyclic diamonds, a Riddler bomb collar, poseable whip, and a polystone whip that attaches to her side when your not using the whip in the display.

Once you put the statue together her measurements come to 37 inches tall, 19 inches long and 27 inches wide with a weight of 34 lbs. The majority of the weight comes from the base, which is a three-corner design with a cat head on each corner.

Not sure why they went with this style of base for her maybe to compensate for her pose? Anyway, the base is grey in tone with bronze colored pipes running along each side with the back of the statue having a bronze bat symbol which is consistent with the rest of the Arkham line. The statue itself sits in the base with one peg on the right foot. I had very little issue sitting the statue in once I had the peg aligned properly and it feels extremely stable once settled.

All in the details

The body is an all black suit that could be a paint disaster due to being all one heavy color, but Prime 1 did a great job of adding different textures to break up all of the black. Also adding designs into the suit that can be seen at first glance that helps pronounce different aspects of the suit and body features such as her left hip sticking out due to her pose.

The body is also is also lined with different buckles in the shape of the Catwoman emblem used in the Arkham games in which the are all painted with a flat silver shade. The boots have tremendous details including the laces and buckles.  At first glance you would almost think they are real.

The different arms include two arms meant to hold the poseable whip which can be used to wrap around her, lay flat on the base or stretched out.  The whip has a lot of play in it and really can be posed any way you could imagine. The other two arms are meant for when she is holding one of the three diamonds.

The diamond can be posed to sit within the fingers but is not really stable and the slightest bump against the shelf I think would knock one of those diamonds out of the hands so be careful with that display option. The body suit opens up in the chest area to expose a translucent skin tone body paint that is really well done for the piece. Even up close the paint doesn’t lose the details that some other pieces with translucent paint normally would.

The only hard part with translucent paint is that it can be difficult to photograph properly which in turn can lead to misinformation on the statue.

Three heads are better than one

The three head portraits include the goggles up no expression battle damaged face, a portrait with battle damage and a smirk, and the exclusive for this piece is the portrait with the goggles down and battle damage. The paint application on all three portraits is top notch and match the design of the character from the game spot on. The red on the goggle is almost a red/black metallic look that really makes each portrait pop. The detail in the battle damage is awesome including bruising around the different cuts. The eyes have a black eyeliner that helps the eyes really standout and seem as if there is really life within each portrait.

The two additional headstands are such a nice touch by Prime 1. It allows you to keep your additional portraits on display when not being used. Those portrait stands have two Catwoman emblems on the front and the back and felt underneath to keep them from scratching.

Both with weight and strong magnets to help keep the portraits in place once keyed in. The keys for each portrait is held in with strong magnets that leave no wiggle room at all once connected.

The Riddler collar that can be an optional display seems to be very fragile and could break easily with just a little pressure. The details in the collar though are true to the game with even a countdown meter and different colored wires running along the collar.

The entire statue has great presence with many different display options that will never keep this statue from getting out dated.  The paint application keeps consistent with other Prime 1 efforts along the Arkham line. Some say that the line is too colorless but it stays true to the game that is dark in tone.

The one negative I’d say about this piece is the size of the base. I’m still not sure why they went with such a large base for this particular piece.  It really limits your display options but if you’re into the 1:3 scale game, then I’m sure you are already aware of the space needed. The piece is up for order as I write this review from Sideshow Collectibles for the retail price of $949 USD for the collector’s edition and $999 USD for the exclusive edition.

Thanks for checking out this review and let us know what you think of the piece or if you plan on picking one up for your collection.